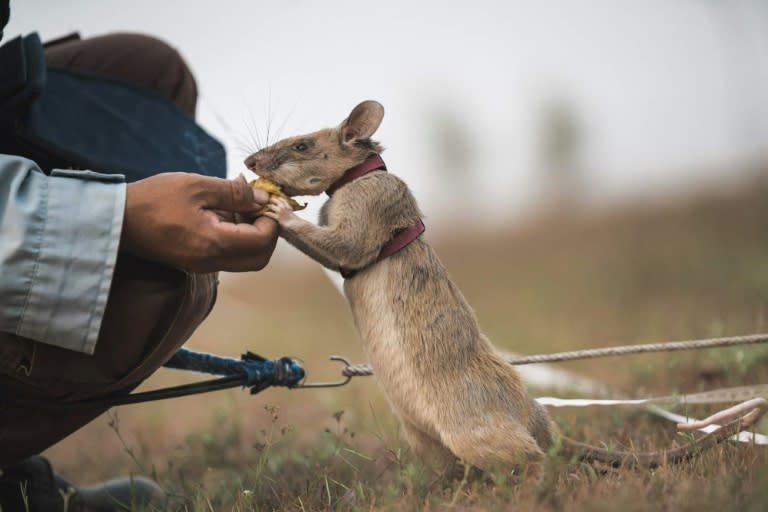 Heroes come in all shapes and sizes. A five-year-old giant African pouched rat called Magawa, however, has to be one of the world’s most unlikely life-savers.

The rodent has won the animal equivalent of Britain’s highest civilian honour for bravery because of his uncanny knack of sniffing out landmines and unexploded ordnance.

British veterinary charity the PDSA on Friday awarded Magawa its Gold Medal “for his life-saving bravery and devotion to duty”, which had transformed the lives of people in Cambodia.

Magawa, who was trained by the Belgian charity APOPO, has sniffed out 39 landmines and 28 items of unexploded ordnance, making him the organisation’s most successful “HeroRAT”.

“HeroRAT Magawa’s work directly saves and changes the lives of men, women and children who are impacted by these landmines.”

Millions of landmines were laid in Cambodia between 1975 and 1998, causing tens of thousands of casualties.

Magawa, based in the northern city of Siem Reap, is the first rat to receive a PDSA medal in the 77 years of the awards, joining an illustrious band of brave canines and felines — and even a pigeon.

The PDSA Gold Medal is the animal equivalent of Britain’s George Cross. The charity also awards the Dickin Medal, for military animals.

APOPO trained Magawa in his native Tanzania to detect the chemical compound within explosives by rewarding him with tasty treats — his favourite being bananas and peanuts.

The rats alert de-miners by scratching the earth.

He can scurry across an area the size of a tennis court in just 30 minutes, something that would take four days using a conventional metal detector.

He is big enough to be attached to a leash as he goes about his business but light enough not to set off mines.