Hurricane Michael, a potentially catastrophic Category 4 storm, is nearing landfall along the Florida Panhandle, bringing a life-threatening storm surge of up to 14 feet high.

Florida Gov. Rick Scott on Wednesday called Michael the worst storm in that coastal area in 100 years. No storm higher than a Category 3 has hit the Panhandle in recorded history.

As the storm barrels ahead with 150 mph winds, thousands have fled the coastline to shelters. But by Wednesday morning, officials said the time to evacuate is now over.

All bridges from Panama City Beach to further inland have closed, so Gordon said she is riding out Michael at home, “hoping and praying that the storm will continue to drift to the northeast … [an area] where it’s not quite as populated.”

Hurricane Michael, set to crash into the coast midday Wednesday, is forecast to bring heavy rain of up to 12 inches.

Water levels were already quickly rising Wednesday and as Michael approached the coast its pressure dropped to about 923 millibars (mb). The lower the pressure, the more intense the storm. Hurricane Katrina in 2005 made landfall with a pressure of 920 millibars.

Hurricane Michael is fast-moving as well is powerful.

“This is a fast storm, but it is going to be like a buzz saw,” warned ABC News chief meteorologist Ginger Zee.

One of the biggest threats is storm surge, which could reach 14 feet when the strong winds push the ocean water onto land.

“This storm can kill you,” Scott said. 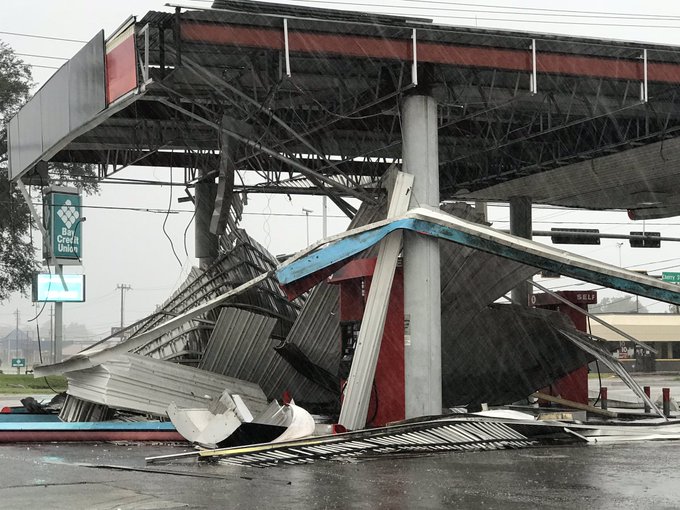 The nation’s emergency management director said he hopes people have evacuated areas that are vulnerable to inundation by a storm surge.

“Largely, the storm surge area is the one unforgiving hazard,” Brock Long, administrator of the Federal Emergency Management Agency, told “Good Morning America” on Wednesday. “Anybody that doesn’t evacuate that experiences storm surge doesn’t typically live to tell about that story.”

The Panhandle is the wide strip of northwest Florida with the Gulf of Mexico to the south and Alabama and Georgia to the north. Popular with tourists for its beaches, the area also has many year-round residents — its largest city is Pensacola, with a population approaching half a million.

The last Category 4 hurricanes to strike the U.S. mainland were both in 2017 — Irma, which slammed into Florida, and Harvey, which hit Texas.

About 375,000 people are under mandatory or voluntary evacuation orders across parts of 18 Florida counties, according to The Associated Press.